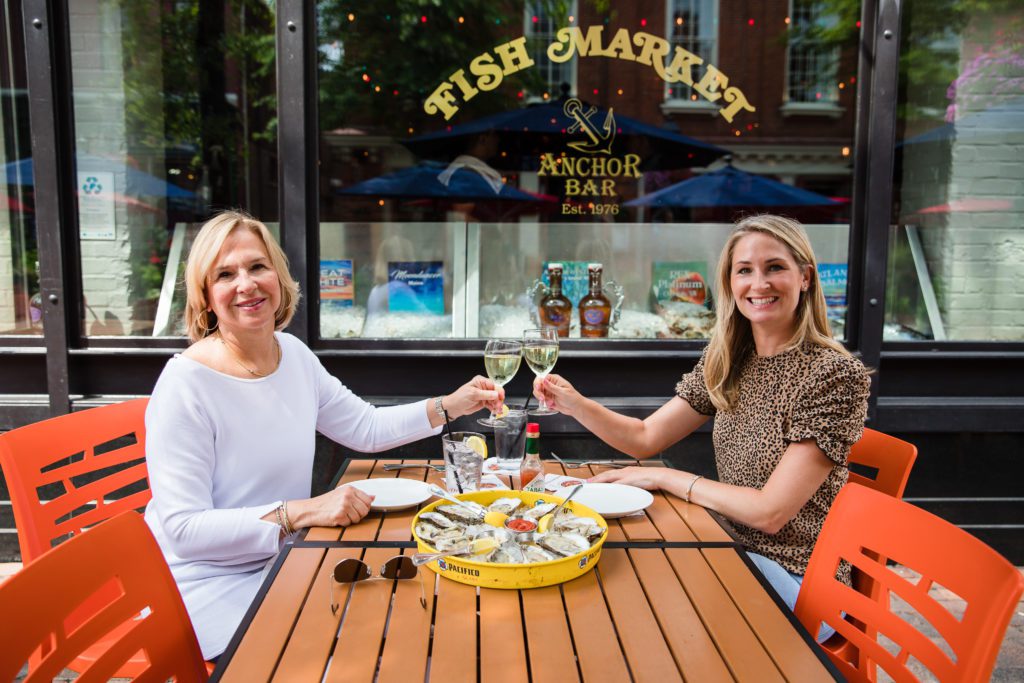 There’s nothing like relaxing with a plate of chilled oysters in our opinion!  From raw oysters to, fried to other fun variations on one of our favorite foods, Alexandria has you covered. We’ve outlined all of our favorite oyster restaurants in Alexandria below. But, you can also take a boat from the Old Town waterfront to The Wharf for some other amazing oyster options as well. If we missed your favorite spots, let us know! Hank’s has quickly become one of the top seafood, especially oyster spots in tow, within now with locations on The Wharf, Old Town, and Dupont Circle. Hank’s offers an oyster happy hour every Tuesday-Friday at all three locations. The happy hour includes half-priced East Coast oysters and a variety of drink specials. From raw bar selections to oyster po’boy sandwiches and fried oysters, Hank’s is sure to satisfy any oyster craving.

Fish Market will serve up oysters any way you like them, including both raw and steamed. You can also try classics like Oysters Rockefeller or step out of the box and try the hot and spicy buffalo oysters. If someone in your group isn’t feeling oysters, you can try the lobster and avocado toast. Yum! Fish Market is also a great place to saddle up to the bar with your favorite oyster and beer pairing and catch the game as well. If you’re looking for some true downhome southern cooking, RT’s in the north end of Del Ray is the place for you. RT’s specializes in Creole and Cajun cuisine with items like Jack Daniel’s shrimp and Cajun Veal Oscar. They also serve up classics like oysters on the half shell and fried oysters with horseradish sauce. RT’s really goes all out in trying to make some unique oyster combinations including the Oysters Uggie which includes oysters topped with garlic, bacon, parmesan, and panko breadcrumbs.

Part of the Homegrown Restaurant Group, Whisky and Oyster, is a delicious seafood option in the Carlyle part of Old Town. They’re also an affordable option that makes for great takeout as well. They also sometimes have a $1 oyster night, which at that price can’t be beaten! Be sure to check out their oysters of the moment. Their oysters of the moment are available for $2.25 per oyster or $20.99 per dozen. Be sure to also try the oyster which includes spicy bloody mary or lemon pepper vodka.

The Wharf has provided fine seafood dining on the 100 block of King Street home for over 20 years. You can order oysters on the half shell from the raw bar, shucked to order with cocktail sauce and lemon. If you’re with a group, try the Old Town Platter which includes a half dozen oysters, three jumbo lump shrimp, chilled jumbo lump crab cake, and tuna poke. You should also try one of their specialties, the Chesapeake Bay Oysters, which includes a half dozen local oysters broiled with smoked Virginia ham and buttery parmesan breadcrumbs. Vola’s happy hour oyster deal can’t be topped for after-work specials. From 3-7 pm Monday-Friday, you can enjoy a $1 chef selection of oysters. All other oysters are 50 percent off too. Cocktails and wine are $6, while draft beers are $6 and $3. Vola’s also offers a variety of other seafood specials like fish and chips and crab cakes. For National Oyster Day, Vola’s is shucking $1 chef-selected oysters. Get them while they last! Upcoming Events in Alexandria in 2023!