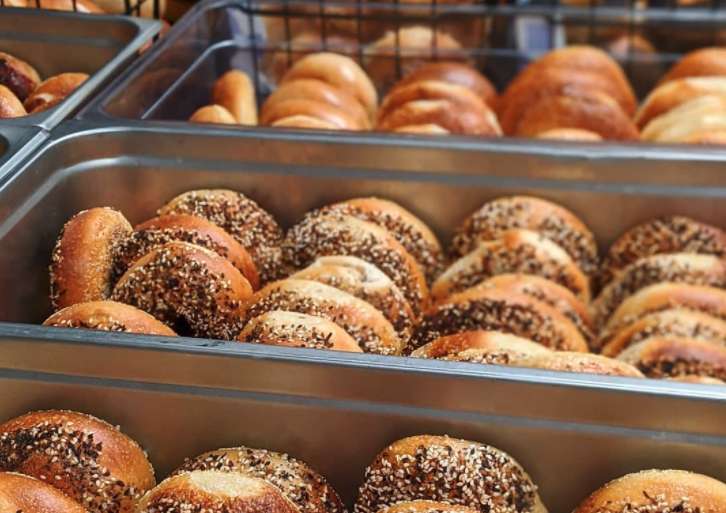 Think you can’t find a good bagel outside of New York City? Think again! The DC area has some delicious bagel options throughout the region. From tasty and chewy to savory and sweet, check out some of the best bagels in the DC area below.

Originally a food truck, the Chewish Deli has taken Old Town by storm since it opened its brick-and-mortar location on Pendleton Street in late 2020. Their menu keeps it simple with an array of different bagels, cream cheeses, breakfast sandwiches, and delicious deli sandwiches as well. We love the pastrami!  Be sure to order early since they often run out of bagels, especially on the weekend! Be on the lookout for their new location opening up soon on King Street near the King Street Metro station. This classic quaint New York deli “bagelry” has been open in the Courthouse neighborhood since 2000. They pride themselves on consistently making a classic New York-style bagel as well as making fresh breakfast and lunch sandwiches in front of you all. They’re also a great inexpensive option as well as you get the New York quality, but not the New York prices. Besides bagels, they also have a wide array of deli sandwiches and subs to try for lunch as well. Brought to you by the same folks that run Stomping Ground, Bagel Uprising has been serving up bagels in Del Ray since 2015 when they began at the farmer’s market. In the fall of 2019, they officially opened up their brick-and-mortar location right in the heart of Del Ray. Their menu keeps it pretty simple with plain, everything, poppy, sesame, salt, and cinnamon flavors, so don’t expect anything too exotic. They also have some fun lunch sandwiches to choose from as well as a tasty pizza bagel to try.

The immensely popular original Bethesda hotspot has since grown to five locations throughout DC, Maryland, and Virginia. They are especially known for their HUGE breakfast sandwiches that are sure to satisfy any appetite. Like Brooklyn Bagel, they’re also fairly inexpensive making it an easy breakfast or lunch spot that won’t break the bank. While having a relatively simple menu with bagels and bagel sandwiches, they also offer a ton of different bagel flavor types including banana nut, cranberry orange, and granola.

St. Elmo’s has been an institution in Del Ray since 1996. The breakfast and lunch spot serves up famous Bullfrog Bagels made just across the river in DC. Pair one of these classic bagels with St. Elmo’s famous coffee and a breakfast pastry and you’ve got a winning breakfast. With their outdoor tables, it’s a great place to bring your four-legged friend as well! Their newly opened location in Old Town gives those in north Old Town new a great breakfast option as well. Call Your Mother exploded onto the DC bagel scene in the spring of 2018 starting out at local farmer’s markets and soon expanding to their first brick and mortar store in Park View. Almost three years and now four locations later, Call Your Mother has become DC’s go-to spot for bagels. While they have traditional bagels and bagel sandwiches, you can also try some of their more funky sandwiches such as The Atrium, which includes peanut butter, jam, and granola, on a plain Bagel. A new Call Your Mother location is expected to open in Old Town on North Pitt Street in 2022.