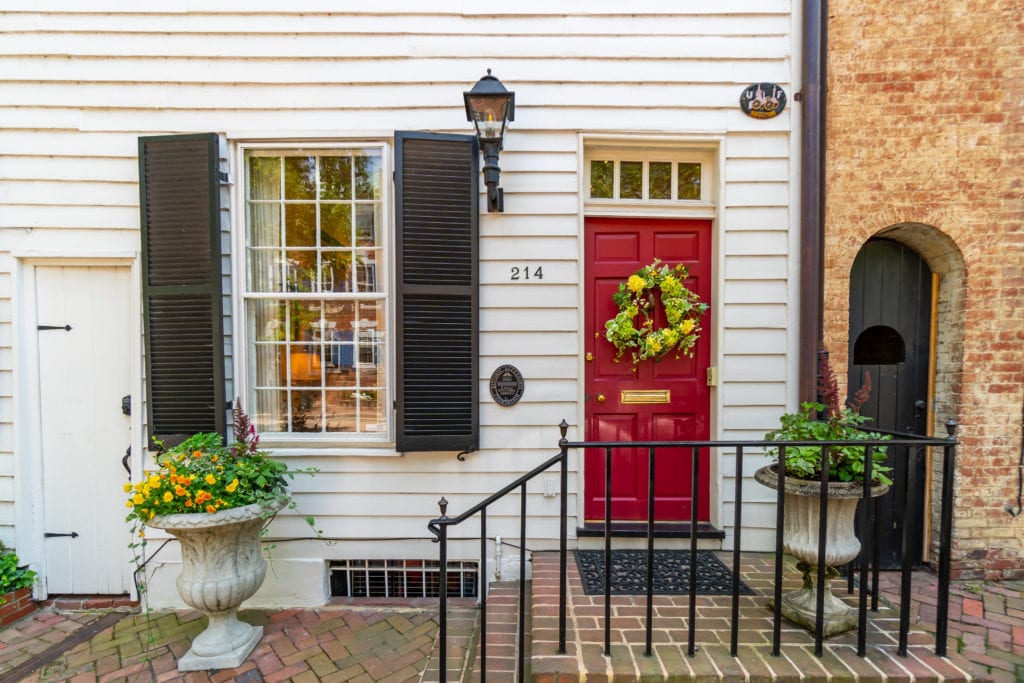 One of the most picturesque stretches of Old Town Alexandria is the two blocks of Prince Street that are known as Captain’s Row (100 block) and Genry Row (200 block). With cobblestone streets lined with 18th-century row houses full of unique architectural details, this area is as charming as it gets in the Washington, DC area. You’ll often spot engaged couples and prom-goers having photoshoots along Prince Street. History tells us that most of the homes on the south side of the 100 block of Prince Street were built in the 18th and 19th-century by Col. George Gilpin, a friend of George Washington and colonial cartographer. The houses on the north side of the block were built by Philadelphia sea captain John Harper, who was also a prominent wheat dealer in Alexandria. These Federal-style homes are full of unique and charming architectural details like wood-beamed ceilings. Captain’s Row was home to many colonial sea captains and Revolutionary patriots.

Local folklore says the Prince Street cobblestones were brought over from England in ships as ballast. Captured Hessians, the German mercenaries hired to fight for the British during the Revolutionary War, are said to have laid the cobblestones. Gentry Row’s late 18th-century rowhouses include Georgian- and Federal-style homes that were popular after the Revolutionary War. Prominent residents of Gentry Row include the powerful William Fairfax, one of Alexandria’s founding trustees and close friend of George Washington, and Dr. James Craik, who served as Surgeon General during the Revolutionary War and as Washington’s personal physician. It was an upper-class neighborhood, primarily home to wealthy merchants, many of whom were Quakers. You can learn more about Gentry Row in this book.

The scenic Potomac River is just a short stroll away. Soak up local history at the Carlyle and Ramsay Houses (also known as the Alexandria Visitor Center)

The Athenaeum occupies the north corner spot at South Lee Street.   As their website notes, this Greek-Revival is one of only two in the City (other is the Lyceum). Built a half-dozen years after Virginia retroceeded from the District of Columbia in 1848, the Athenaeum has seen many occupants, including banks, a commissary during the Civil War, a house of worship, a warehouse, and the Northern Virginia Fine Arts Association.

Countless boutiques, shops, and restaurants are also within walking distance. Stop by to Old Town Books to pick up your next read or The Lucky Knot for a fun new outfit or bauble. Be sure to check out the seven art galleries and 80+ working artist studios in the Torpedo Factory Art Center. Some of our favorite bars and restaurants include Virtue Feed and Grain, Hummingbird, Vola’s Dockside, Landini Brothers, and Daniel O’Connell’s. The Captain’s Row/Gentry Row area is one of the most sought after parts of Old Town to call home. While prices are steep, the charm and convenience are priceless! Homes in this area rarely come on the market but we have one for you!